Darn, I’m pretty late to the Instagram Engineering Challenge party but it was still a fun little puzzle to solve even if there is no free schwag left.

Some of the Hacker News crowd felt it was too easy but I thought it struck the right balance between too easy and too much work for a take-home recruiting problem. Besides, as others pointed out, you can always remove some of the simplifying assumptions (images don’t have large blocks of repeating colors, adjacent shreds will never be in the correct order, etc) and you can make the problem as difficult as you want it to be.

The general solution sketch is fairly obvious: Compare colors in adjacent vertical pixel strips and if they are “close” to each other then the two strips should be adjacent to each other in the unshredded image. As far as distance metrics go, measuring the euclidean distance between two RGBA pixels and summing up the values for each pixel in the strip is the first thing that comes to mind.

The above seemed like a reasonable avenue of attack but, alas, the devil is in the details as they say.

The first bump in the road that came up was trying to determine what the first shred in the image is. For this, I ended up measuring the distance between every pair of shreds. For each shred, you can then determine what its preceding shred is by picking the one with the smallest distance value. The shred whose smallest distance value is the greatest amongst all shreds likely doesn’t have a previous shred and is thus the left-most shred in the image.

Next, I noticed that the algorithm was having problems with the tall black and white building in the photo. The building is unfortunately split right along a white-black transition. This causes the adjacent pixels to be rather different from each other: 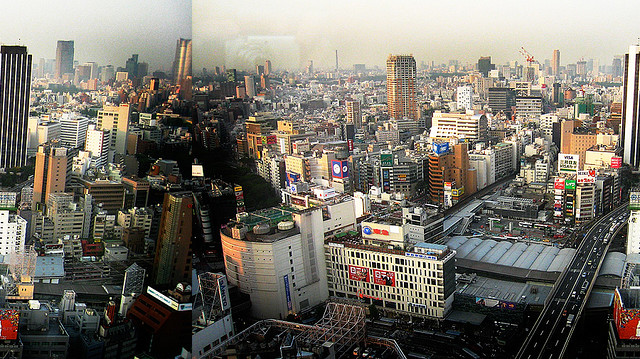 To fix this, I needed a way to smooth out the colors used in the strips. So, rather than consider each pixel in isolation, I calculated the average color of the pixel and its surrounding neighbors (a 3×3 mask seemed to work ok on this image).

Fun way to spend an afternoon :). The python code is below and it is completely untested on any other image of course.